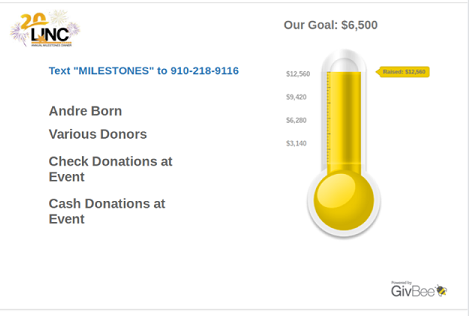 Each year, more than 600,000 individuals are released from state and federal prisons, with more than 67% of them being rearrested within three years. Having a positive reentry experience is vital in breaking the cycle of incarceration dependence and helping people readjust to life outside of prison. Since June of 2000, LINC, Inc. has been providing transitional living and case management services to meet the immediate needs of men and women returning from prison in Wilmington, North Carolina. LINC’s programs have been successful in helping impacted people become productive members of the community through job training programs, addiction counseling, mental health care, life skills, and educational programs.

Like many non-profits, LINC’s events, dinners, and galas provide the bulk of their fundraising income for the year. For the past 6 years, they‘ve hosted an Annual Milestones Dinner where they recognize the accomplishments of program participants and induct outstanding supporters into their LINC Society. This year’s dinner marked the organization’s 20th year. And because it was a flagship year, LINC set their fundraising goal at $6,500 — 60% higher than the previous year.

So how did they sell out the event and blow past their fundraising goals? They booked keynote speaker Amanda Knox – exoneree, journalist, and author of the New York Times best-selling memoir, Waiting to Be Heard and they created and executed a strong digital and text marketing strategy to sell tickets, recruit sponsors, and encourage people to donate.

Digital and text marketing encourages donations before, during and after the event

LINC took a multi-channel approach to promote the event, engaging donors during the event, and following up with attendees post-event. Here’s how they executed on their digital and text marketing strategy and crushed their fundraising goal.

Weeks before the event, LINC announced the event via email and encouraged people to register or to become a sponsor. They then posted thank you’s to Facebook for every sponsor that signed on — creating all kinds of early buzz around the event. The team also pre-scheduled emails and Facebook posts for when the event started to encourage donations from followers who weren’t able to attend.

One highly effective fundraising strategy for LINC was using Facebook and GivBee’s texting platform in combination. Shortly after going live at the event,  the team posted an image of their text donation thermometer on Facebook. The post read, “If you’re not with us right now, you still have the opportunity to participate via “text-to-give”. Simply text “MILESTONES” to 910-218-9116 and your name and gift will show up on the thermometer.”

Prior to that announcement, donations had leveled off at around $6,500. But when that appeal was made, things changed instantly. Anne Rose, LINC’s Director, Development and Communications, explained it like this, “The buzz in the room was amazing – as donations were being made via the text system, the people in the room started clapping and the thermometer total went up and up. The energy that the thermometer creates is infectious. In a span of about five minutes, donations increased by 38% to $9,000. At first, I thought it was a mistake because the amount shot up so fast.” she said.

And because those who were on LINC’s Facebook page were also able to see the thermometer, they were inspired to give too.  By the end of the dinner, donations totaled $10,000.

A scheduled email blast via Constant Contact was also sent to LINC’s entire mailing list, timed to be delivered while the event was happening. The message in the email was the same as that posted on Facebook; it had the image of the thermometer and a prompt to donate by text, even if the recipient wasn’t at the event.

The Milestone Dinner was a great success, but things did not end there. LINC’s supporters began sharing the thermometer post on Facebook, which helped to secure another $2,000 for the cause. To celebrate their fundraising success, LINC posted screenshots of the event on Facebook and in their newsletter. They also sent follow up emails thanking everyone for their generous support.

Integration with NeonCRM simplifies the process

LINC uses the NeonCRM platform to manage and track donations. Because GivBee’s texting service integrates with Neon’s system, Anne’s team did not need to re-key or import donations into the platform. She said, “I love that the texting tool was compatible with NeonCRM – the integration between the two platforms is amazing. Donations were automatically posted to the campaign and into matching donor accounts. All donors received an immediate acknowledgment.”

As part of the texting service, GivBee provides training and support. Anne had this to say, “GivBee’s solution is very simple to use. There are enough features to customize the tool, but you don’t need to be a tech expert to implement it. I’m very comfortable with technology, but I think GivBee’s texting service would be easy for anyone to use.”

During their initial training session, GivBee’s rep gave Anne some ideas about how to use the text service to follow up with her attendees in the weeks following their event. This simple effort brought in additional donations.

The results say it all

When all was said and done, LINC raised $12,000 with the direct appeal during the event – $5,500 above their initial goal. By implementing a solid digital and text marketing strategy, Anne and her team were able to exceed their target and keep supporters engaged long after their event was over.  She added, ”Without a doubt, I would use the texting service and thermometer again. I can see us using it for annual fundraising events via social media instead of an in-person event. It was great fun and a great success, and our board members were thrilled with it I’m glad we found GivBee.”

To see how GivBee’s texting system can work for your non-profit, schedule a live demo.